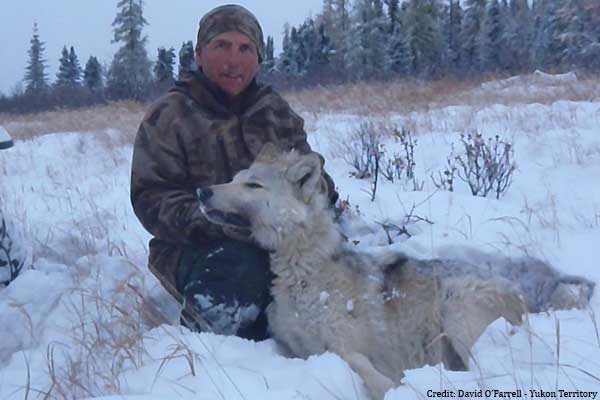 This past fall [HuntWolves.com] gave me the opportunity to test two new wolf howlers that they sell through their website, HuntWolves.com. I was particularly interested in these new howlers since I have had success howling in wolves by mouth in the past. The two howlers I was interested in are the ‘Alpha Howler,’ manufactured by Bugling Bull Game Calls LLC, and the excellent Wolf Howler, wolf call manufactured by E.L.K. Inc.

As it turned out I really got to put both calls to the test. I spent a total of 42- days guiding hunters in some of the most remote country the Yukon Territory has to offer. These calls are tough! I carried both howlers in my pack every day, and they worked flawlessly every time.

I found the Alpha Howler Wolf Call very easy to use, and the adjustable tone selector made it easy for me to change things up depending on the situation. I really appreciated the open reed design of this call later in the season. I had no problems with this howler freezing, even in temperatures well below 32 degrees.

While the Wolf Howler Wolf Call by E.L.K. Inc. did take some practice; once I had it mastered, it quickly became my hands down favorite wolf call of all time. This call is simply amazing. With practice long lonesome howls, whines, and barks are easy. I took my first wolf of the season with this call. Late one afternoon as we were returning to camp in the Argo, we spooked an unusually light colored wolf out of a small clearing. With no time to really get set up properly, I pulled the E.L.K. Inc. Howler out of my pack and let a series of low howls drift through the trees. Less than 10 minutes later we spotted movement in a small clearing 200- yards away. The big canine was coming to us on a string. A short bark from the call stopped it long enough for me to settle the crosshairs on the chest. Since the wolf population in the area is so high, I was happy to find it was a beautiful adult female. No doubt this wolf was part of the pack that was in the area. She was likely out scouting for game and thought my howls were wolves from her pack.

The bottom line is that anyone serious about hunting wolves needs to take a look at these two new howlers. They quickly became the most important tool in my wolf hunting toolbox.