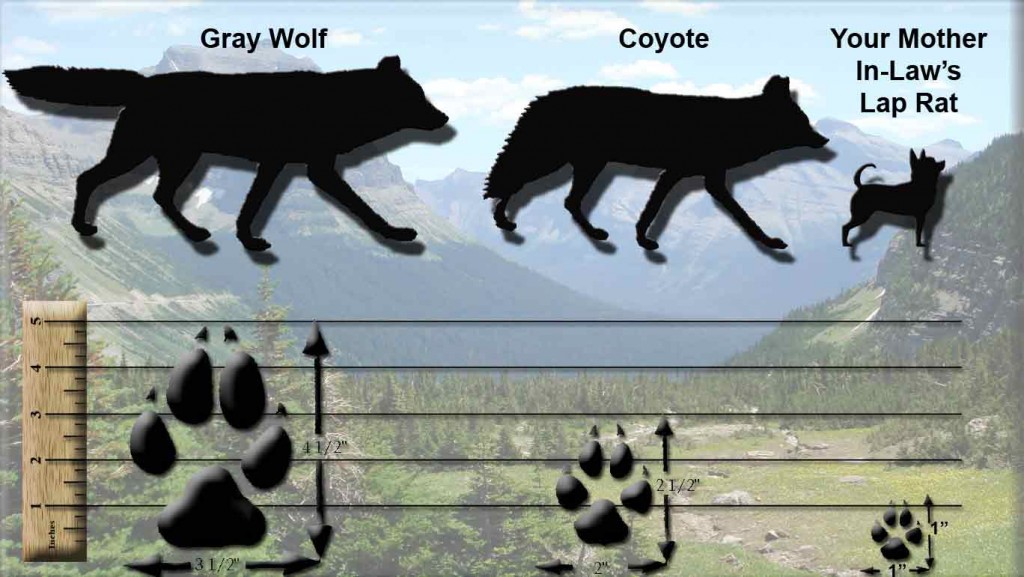 If you’re planning on hunting wolves, obviously one of the first things you should be able to do is identify a wolf. Yah, I know. You probably have a pretty good idea what a wolf looks like up close... big ears, big teeth, sometimes dressed like a grandmother and often seen huffing and puffing at straw houses. From a couple hundred yards away though, a grey wolf can look awfully similar to America’s most prevalent canine, the coyote. Shooting a coyote by mistaking it for a wolf is no big deal because coyotes can be hunted year round in Idaho, Montana and Wyoming. Shooting a wolf thinking it is a coyote on the other hand, is another story.

To avoid this hunting fau paux, and save yourself an hour or two of shoveling, keep in mind these key distinctions between the wolf and the coyote. First, and most obvious, wolves are much larger than coyotes.  Coyotes typically weigh in from 25-55 lbs, while even the smallest adult wolf generally tips the scale at 60lbs or more. Large males can easily weigh 150lbs. The average coyote also only stands about 1.5 ft tall, and the average wolf about 2.5 ft tall. Size, however, is not always a fool proof indicator, because the sizes of a large coyote and pup wolf would likely overlap.

Coyotes are generally thinner, sleeker, and more agile than a wolf when moving. Wolves are bulkier, have rounder ears on a blockier head, and are not nearly as light on their feet.  Coyotes also only come in shades of gray, and speckled brown. Wolves can range from white, to light gray, to black.  If you’ve considered all these things and still can’t determine what the critter in your crosshairs is, it's probably  wise to ease off the trigger.